Back to previous page

The principal objective of InnoForESt is to foster innovations on the ground. This objective is mirrored in the strong cooperation with the practice partners from the Innovation Regions. Such an approach presupposes close engagement with existing groups of actors but may also entail the active support of existing or new networks and platforms in later stages of the innovation process. Given the strong actor orientation of the project, ways of finding and mobilising stakeholders are emphasised. Finding and contacting them is relevant throughout the innovation process, in order to scope opportunities, but it is most important, when the innovation is rather new. Mobilising stakeholders can be an issue throughout the innovation process, too, as the innovation teams may need additional support to spark the interest of those stakeholders relevant for the innovation. On an operational level, this process entails a continual dialogue between science and practice partners, including bilateral talks about methodological issues, assistance with analyses, training, etc.

The core idea of assessing a technology or innovation ‘constructively’ is to contribute to the shaping of an innovation. In the context of InnoForESt, this means to develop a novel or revised forest ecosystem service governance approach. The question how such a contribution can be made is not trivial. At early stages of the development of an innovation, there is plenty of scope for designing, but comparatively little indication about which direction the innovation can take or what the criteria might be to assess the design alternatives, whereas at later stages this assessment is easier, but the design scope will have decreased as routines and consolidation have been established (cf. Collingridge 1980). Before an innovation has stabilised, Constructive Innovation Assessment inserts opportunities for structured reflection on alternative innovation options, aspects, and dimensions, as well as on the conditions under which an option could be realised.

CINA assumes that actors, which take different roles and positions with respect to an innovation, would also be taking different perspectives that ultimately may lead them to different valuations of the chances and limitations of a development. In this context, we speak of ‘enactors’ and ‘selectors’ – those actors who actively push an innovation forward and place it at the centre of their thinking, and those for whom this very innovation is only one option among several. In order to bridge and facilitate between these actors and their viewpoints, CINA offers specific occasions for shared reasoning.

Against all the variability of innovation and the limitedness of the chance to anticipate it, from an innovation studies point of view, the development of innovations follows regularities and patterns. Dynamics and patterns in different dimensions seem to play a role: from local micro processes over dynamics in specific areas to broader landscape developments, as well as typical governance, business, natural/biophysical, and techno-scientific dynamics. Knowing about and anticipating these patterns for a given innovation is expected to help the actors in the innovation network to carefully preview at least some principle aspects of what is typical for a particular kind of development and innovation format, as far as it can be described in a scenario and be done in a reflexive and controlled speculation. This collective speculation can, if done well, become part of the innovation process, as the negotiation of what enactors and selectors actually want to pursue.

The CINA approach combines sound research on innovation situations with a series of stakeholder workshops. The results of the research go into the preparation of the workshops, and the workshop results can be used by interested stakeholders as strategic intelligence for their innovation projects, and by the researchers for scholarly reflection and publication. The CINA approach aims at establishing a fertile environment, in which those interested can probe each other’s worlds, provided that:

The research can use all kinds of methods appropriate for the subject matter at hand. Since the CINA approach requires practical understanding about the innovation efforts (be it a new governance approach or a new technology, a new business model or service, a prototype or product) as well as a broader overview over the circumstances under which the innovation takes place  (the alternatives to the innovation, the history, the expectations for the future of the innovation and its use, the policy and market environment, etc.), it is wise to study the innovation to a larger extent in its context and with direct communication with the practitioners involved.

Those preparing for a CINA workshop need to be quite familiar with the field and possess enough context knowledge in order to be able to moderate deliberations in such a way that they can stimulate discussion through specific hints and by including relevant issues and stakeholders, anticipating what kind of contributions they typically make. This is the case both for the composition of the workshop (invitation, setting the frame) as well as for carrying out the workshop. Well-informed, realistic, and thought-provoking scenarios (narratives, with conceptual graphs, symbolic pictures, etc.) are a core tool for CINA workshops. The preparation of a CINA workshop therefore crystallises in the development of scenarios the participants find compelling to discuss, because they mirror the situation they are in or aiming at, while also projecting realistic expectations about how specific conditions may influence the feasibility or further development of an innovation.

The workshops are to be moderated as safe spaces, in which those committed to collective reflection on an innovation can think out of the box. They serve as carefully and minimally structured occasions for strategy articulation:

The workshops need to be specific about the cases at hand, the actors participating, the options discussed through the scenarios – but they also need to be open-minded, unrestricted, inviting for critical remarks, counter-arguments, alternatives:

The scenarios derived will:

The scenarios in InnoForESt are based on a series of research efforts the project has placed in its first year: the mapping of biophysical and institutional conditions for forest ecosystem services across Europe and in the Innovation Regions, the Stakeholder Analysis and the Governance Situation Assessment. In the further pursuit of the project, particularly through the innovation platforms and the workshops, the research focuses on integrating the new findings from the interactions with the stakeholders in the Innovation Regions into the further development of the prototypes. The learning curve also connects one workshop to the subsequent one, as the results of one workshop will feed into the next innovation action, and the findings about the innovation actions will again feed into the next-stage workshop and the revised scenarios used there.

The CINA method relies on the formulation of scenarios which are weighed against each other by stakeholders during intensive workshops. A scenario, as InnoForESt understands it, is at the same time a ‘useful fiction’ and a ‘holding device’. In turn, we understand a ‘useful fiction’ as a coherent story or plot of a world, in which the innovation has taken on a specific shape. A ‘holding device’ is a condensation of what is known about one possible development. In other words, a scenario is a thoughtful, systematic, rich mixture of creativity and prior knowledge of the governance situation. It tells a thought-provoking story about how an innovation may take shape. Based on the world today, the future holds a range of possible outcomes limited only by extreme scenarios, which border on impossibility. Opening up possible futures of the innovation for discussion, the scenarios trigger speculation about and reflection on possible outcomes and their opinion and feelings about these. This way of discussing potential governance innovations is an alternative for plain guessing, naively carrying on with known/outdated routines or for relying on prediction in the strictest sense. For the CINA method, some of these scenarios are used to take a closer look at and engage with.

During stakeholder workshops a small set – say 3 – scenarios with different plotlines and potential future contexts are discussed. Such discussion intends to tease stakeholders out of their shell and stimulate out-of-the-box talk about what is important, what may be missing in the scenarios or which links and incompatibilities exist between scenario elements. Mind that the scenarios are thought experiments and are not the only way the different scenario elements can be storified. In scenarios for following workshops, resonating elements from different scenarios may be recombined.

Figure 10 shows the idealised intertwining of research, network collaboration, and CINA workshops. In principle, the trajectory entails research to derive a set of raw scenarios which will subsequently be refined by close consultation with the stakeholders of the innovation network and in a first CINA workshop. At this first workshop, the most viable scenarios are selected and developed into the actual prototypes. Once the prototypes are clear and work with them has started, the second CINA workshop is dedicated to assessing and reconfiguring the prototypes – again as scenarios, this time of the prototypes. After the most viable prototype configuration has been advanced, roadmap scenarios for continuation of the prototype beyond the project time frame are probed in the third CINA workshop. The input for this workshop is again a set of explicit forward-looking scenarios. 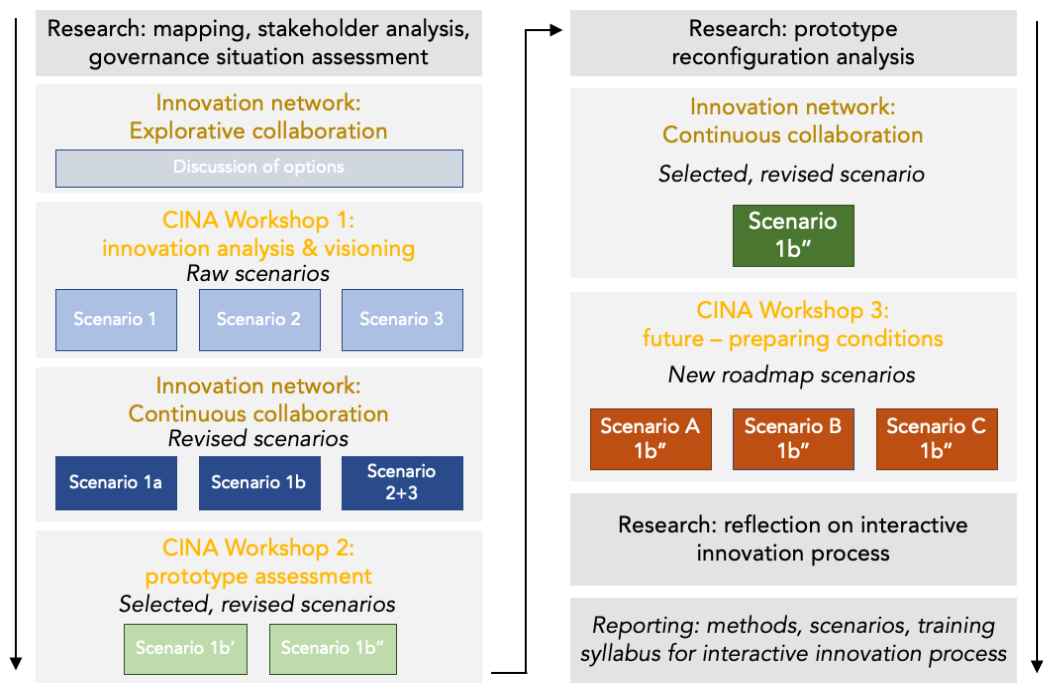